When Barack Hussein Obama came into office, national average price for gasoline was nominally $2 per gallon and was just over $800 per ounce.

Today (29 Mar 2012) national average price for gasoline is above $4 per gallon and gold has also doubled in price. 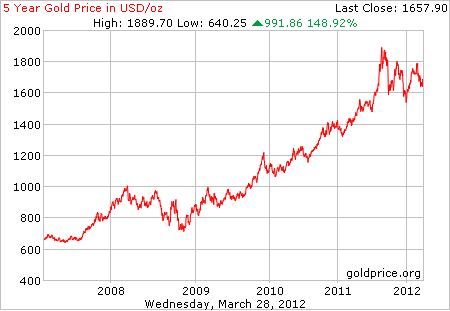 All commodity prices are running up as they are affected by inflation. If you doubt this, just check food prices next trip to the supermarket.

China reduced its U.S. Treasury bond holdings by $32 billion. There appears to be an upswing in foreign purchases and I suspect the reason for this is while our finances are a mess, foreign finances are much worse. Foreign investors see us as less of a mess.

This inflationary spiral will affect everyone because wages always fall way behind inflation. Consequently, Americans will spend more on fuel and commodities and have less disposable income to purchase hard goods.

Remember in November and vote Republican. The worst we Republicans have to offer is by far superior to the best the Democrats offer.

One thought on “USA – Inflation Nation”