Yesterday, while out shopping, did you notice elderly veterans accepting donations for fellow homeless veterans? 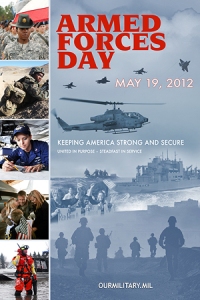 Another day commemorates those who died in service to our nation – Memorial Day.

On 5 May 1868, General John Logan, national commander of the Grand Army of the Republic, called for flowers to placed at grave markers of all union and southern military personnel buried at Arlington National Cemetery. Northern states readily adopted the holiday, but southern states refused until after WW1, the war in which my father served.

Actual Memorial Day falls on May 30, but will be observed on May 28, a day of convenience to create a 3-day holiday. Memorial Day has essentially lost its meaning.

Armed Forces Day passed without so much as a “peep” from the president. This year, I hope there will truly be a day of Memorial to the more than 1,346,000 men and women who have died in defense of your liberties.

By all means enjoy your three-day holiday. I simply ask you to remember WHY Memorial Day exists.

We cherish too, the Poppy red
That grows on fields where valor led,
It seems to signal to the skies
That blood of heroes never dies.
– Moina Michael