Did you see this picture on DrudgeReport.com? As it says in the associated 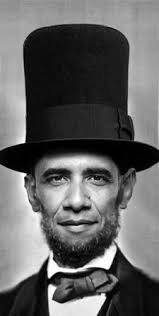 article, “many Senate Republicans … say that, with Congress gridlocked, it’s now all up to Mr. Obama to produce a plan that can both cut deficits and win bipartisan support.”

All up to Obama? Are you people in Washington so dimwitted you can’t understand he has you right where he wants you?

All this clamor for Obama to lead. He is leading – leading into an abyss of red ink from which we may never recover. He’s leading us into a defenseless situation whereby we are now at the mercy of rogue nations like North Korea and Russia.

We don’t need more leadership from him. We need NON-partisan leadership in the House of Representatives and the Senate.

According to the Constitution, spending bills ORIGINATE in the House, not the White House.

Has it escaped your notice, Senators? Yes, senators, plural, Democrats and Republicans alike.

This is almost the entire population of the great state of Texas! Our state population is just over 25,000,000.

Look carefully at these numbers displayed in real time on the National Debt Clock. Values shown below were captured 30 December 2012 at 0659 hours. Click on the image for real time numbers.