Skip to content
RockwallConservative civil rights, Community, Faith, History, Politics August 30, 2015 2 Minutes
30 August 2015 AD/15 Elul 5775
What can destroy our nation? Division. Divide-and-conquer is a proven strategy that works every time it’s applied.
Candidate Barack Hussein Obama openly stated his goal to “fundamentally transform America”. He assumes, he believes, all black-skinned persons agree with him. In fact, a lot do, as witnessed in Waller County, Texas where heavily-armed Black Panthers moving in military-like formations openly called for the unrestricted murder of law enforcement officers.
Media reports make those domestic terrorists appear heroic, but this is not so. They are ignorant thugs whose hatred arises from inflammatory rhetoric and an assumption black people can’t possibly commit crimes.
Let’s not be misled. FEW black Americans agree with the Al Sharptons, Jesse Jacksons, Jeremiah Wrights and Black Panthers. Whether Democrat or Republican, your black neighbors generally share values of the greater population of our country. Your values. 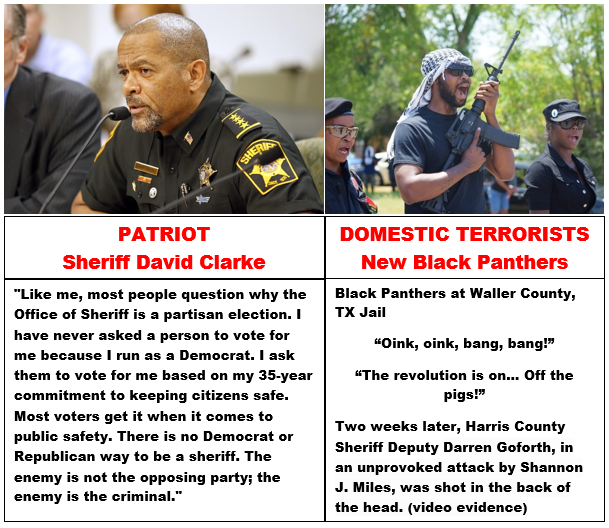 I suggest you do two things.
First, look to Milwaukee County Sheriff David Clarke, U.S. Army (retired) Lt. Col. Allen West, acclaimed neurosurgeon Dr. Ben Carson and former welfare dependent Star Parker for your prototypes of black patriots.
Second, accept the fact of racial division fomented by this sitting president and his Attorney General. He welcomes inner-city racial strife as a means to expand his choke hold on America.
When our economy inevitably collapses, inner-city murder and mayhem will greatly expand. What to do? Watch your back. That murderer of Waller County Deputy Darren Goforth has a criminal past, is ignorant of history, has disdain for authority and he had a gun. There are plenty of people like Shannon Miles, Michael Brown and Trayvon Benjamin Martin.
What should you do? Be watchful. Avoid giving opportunity to armed conflict, but be prepared to defend yourself and others nearby. Don’t assume all black people are out to get you. Pray for God to open the eyes of people who are being deceived by Satan.
Be mindful of police activity. When you see police in traffic stops and elsewhere engaging the public, take a second look. That officer may need your assistance in one way or another. Act wisely.
Bad news: Things will get worse. Much worse.
Good news: God is on his throne, prayer changes things and Jesus is coming soon.
John White