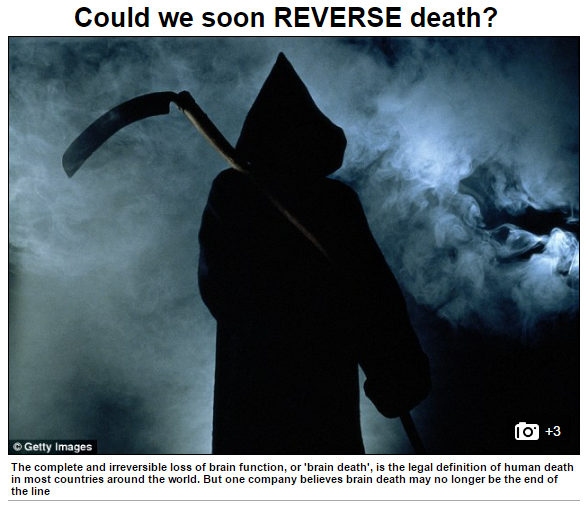 “Bioquark, a healthcare company set up to look into so-called ‘repair’ and ‘reanimation’ technologies claims death may not be ‘irreversible’ and we have reached a point to ‘push the envelope’ and test if this is really the case.” Read more from The Daily Mail http://ow.ly/4n0U19

I’ve discovered an amazing scientific breakthrough that was publicized in the most widely read scientific journal of all time: the Holy Bible.

My medical insurance will not cover Bioquark’s treatment, but my life assurance will.

The probability of your death is 100%. As it is written, we all have an appointment with death. There is a post-death appointment before a judge. The latter appointment is of greater interest to me than the first.

As each of us experiences our individual appointments with death, we will afterward be going one way or another, one desirable, the other not so much. Let’s talk about the undesirable destination.

In Mark chapter 9, verse 44, we read about a place of unquenchable fire, a fire that never goes out, and immortal maggots that feed eternally on human flesh. This place will NOT be number one on TripAdvisor.com. For me, this would be the WRONG WAY.

Next, let’s consider THE WAY, the right way.

Jesus Christ, aka Yeshua Ha-Mashiach, has the ultimate resort where a guest room awaits all who believe in Him, those whose sins have been blotted out of the sight of God the Father by the blood of Jesus the Son of God.

How do we get to the better resort?

Jesus says, “I am the way, the truth, and the life. No one can come to the Father except through me.” In other words, no other ‘travel agent’ can book the Father’s House; only Jesus.

I was two month shy of my 28th birthday when I called on the name of the Lord. From that moment to this day my life has been in continuous transformation.

There is already a guest room awaiting my arrival. What about you?

Making a reservation is easier than any on-line travel service. Believe on the Lord Jesus Christ, and you will be saved. Call on His name; ask forgiveness of your sins; turn from sinful ways. Your reservation will automatically be guaranteed, even for late arrival.

And on that matter of reversing death, it’s call resurrection.