I came upon this paper towel advisory at one stop of my marathon road trip this week. 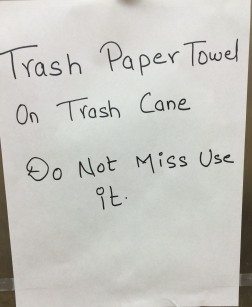 That paper towel advisory connected my thoughts with two conversations on Thursday, one with a learned woman, the other with a college student.

In a discussion around the topic of the Freedom of Religion, the college student remarked that the “wall of separation between church and state” is a constitutional principle. Big sigh. It was a teachable moment as I explained how that phrase comes neither from the Constitution nor from the Declaration of Independence, but was a comment in a letter from Thomas Jefferson (a man who had no part in drafting the Constitution) and the Danbury Baptists who feared one Christian denomination would be officially sanctioned.

Collectively, the above three experiences drew my thoughts to one of my great books written by Stephen Prothero, titled Religious Literacy. Perhaps a better title could be Religious Illiteracy.

That word – literacy – embodies more than “the ability to read and write”; wrapped within that word is “knowledge that relates to a specified subject”.

My advice to the young college student was to focus a great deal of study on history, explaining to him that when someone steals (or revises) your history, they can control your destiny.

Our Founding Fathers were a broad spectrum of Americana, from farmers to theologians. What they held in common was literacy in history, the Bible, English Common Law and the sin nature of all mankind.

Without a doubt, our Founding Fathers were highly literate men that set forth the PRINCIPLES of our country in the Declaration of Independence. They next created a framework by mechanisms those timeless principles were to be observed; that framework is our Constitution.

As the Apostle Paul wrote in Romans and 1 Thessalonians, I do not want you to be ignorant, my fellow Americans and you who would become citizens of this great country.