Regardless the contemporary labels, homosexuality is what is has been since the earliest days of mankind on earth: an abomination before God’s eyes.

Within the span of my lifetime, governments have been transformed from following sound doctrine and the Rule of Law to being reprobate governments that now license behaviors historically known to be harmful to society.

This week, the Secretary of Defense Ash Carter said via a published statement on a change in armed forces policy, “The Defense Department’s current regulations regarding transgender service members are outdated and are causing uncertainty that distracts commanders from our core missions…DoD will create a working group to study…with the presumption that transgender persons can serve openly without adverse impact on military effectiveness and readiness…Second, I am directing that decision authority in all administrative discharges for those diagnosed with gender dysphoria or who identify themselves as transgender be elevated to Under Secretary Carson, who will make determinations on all potential separations.”

The process of reprobation has not its genesis in the Obama administration. Then-president Bill Clinton facilitated by means of his don’t ask, don’t tell policy. Moral and hence military readiness began a precipitous decline under Hillary Clinton’s husband’s time in the Oval Office. It was Barack Obama who ended the don’t ask, don’t tell policy on September 20, 2011.

Subsequent to the Clinton policy, career military personnel left military service; many left behind their retirement. Yes, NPR, CNN, and all the progressive news sources tout all the many wonderful benefits of removing the ban, but facts run contrary to the pro-homosexual stories.  One such Army veteran living and working in Plano, TX said to me, “I just couldn’t take it anymore.” This veteran walked away from his retirement. 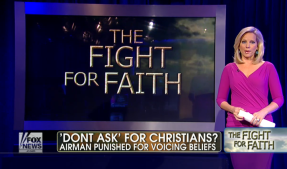 let-live situation, but such is not the case. The story of USAF Senior Master Sergeant Phillip Monk, a nineteen-year veteran who was ‘reassigned’ because his Christian beliefs conflicted with his female commanding officer’s pro-gay marriage stance. This injustice occurred right here in Texas at Lackland AFB. Read the full story titled REVERSE Don’t Ask Don’t Tell for Christians? Air Force Sergeant REASSIGNED for disagreeing with gay marriage.

Is America without hope? Are we to be but a footnote to world history? No, we are never without hope. Homosexuality and communism share a common character flaw: atheism, just ordinary sin.

Our hope lies in the hands of the Living God who sent his Son Jesus Christ, also known by his Jewish name Yeshua HaMashiach, manifested on earth with one solitary purpose: to undo, to destroy, to abolish all the works of Satan. [1 John 3:8]

You who are alive and reading this can have hope. The Lord Jesus Christ is as near as your next breath. He bore all our sins upon himself and his blood was shed on a hateful cross to cover all our sins if we simply repent from our sinful ways and call on his Name.

You who are also believers in Jesus Christ, disciples in every sense of the word, are not programmed to lie down and allow the LGBT-homosexual movement to trample you. You have been given an assignment and the authority and power to carry out that assignment. As it is written, “From the days of John the Baptist until now the kingdom of heaven suffers violent assault, and violent men seize it by force [as a precious prize].” Do as Peter and John who refused to disobey the Word of God, saying, “Whether it is right in the sight of God to listen to you and obey you rather than God, you must judge [for yourselves]; for we, on our part, cannot stop telling [people] about what we have seen and heard.”