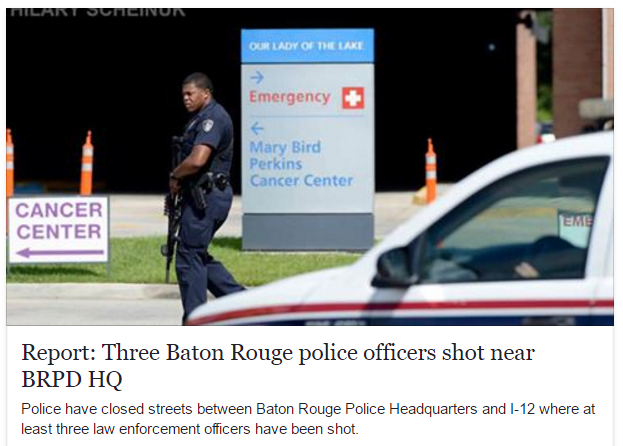 BreitBart.com ‘Officers Down’: Cops Shot in Baton Rouge: http://ow.ly/Wjv2302koyy
Cleveland Police Officer on Baton Rouge Shooting: Obama ‘Has Blood On His Hands’ http://ow.ly/2tun302koBK
My opinion: Barack Obama speaks from both sides of his mouth. From one side, he claims to support local law enforcement; from the other, he incites anger and justifies attacks on authorities by bringing past grievances to the present.
In his address to commemorate ratification of the Thirteenth Amendment on December 9, 2015, he used the present tense verb ‘is’ instead of the past tense verb ‘was’, or ‘used to be’.
The root of the problem is one of unforgiveness. Obama’s inflammatory anti-cop rhetoric dates back to his 2009 “Beer Summit” in Boston. Immediately after the lawful arrest of Henry Louis Gates, this sitting president said, “I don’t know, not having been there and not seeing all the facts, what role race played…But I think it’s fair to say, No. 1, any of us would be pretty angry; No. 2, that the Cambridge police acted stupidly in arresting somebody when there was already proof that they were in their own home; and, No. 3 … that there’s a long history in this country of African-Americans and Latinos being stopped by law enforcement disproportionately.”
He admits he did not know the facts but assumed Sgt. James Crowley “acted stupidly” and the arrest was solely based on the color of Mr. Gates’ skin. Facts run contrary to his public statements.
Obama has fostered a hatred of local law enforcement officers from the outset of his presidency in 2009. To Obama, a black man can do no wrong while cops are always in the wrong.
Police Patrolmen’s Association President Steve Loomis rightfully said President Barack Obama had “blood on his hands.”
I quote from Officer Loomis: “The president of the Untied States validated a false narrative and the nonsense that Black Lives Matter and the Media are pressing out to the public — validated with his very divisive statements And now we see an escalation. This has got to end. We need some leadership in this country to come forward and put an end to this. I don’t care if it’s clergy or who it is but somebody has to step up and put an end to this. It’s false narrative and people politicizing the false narrative that we have a president of the united states and governor of Minnesota making a statement less than one day after the police involved shootings. The police involved shootings are what absolutely has triggered in [a] rash of senseless murders of law enforcement officers across the country. It is reprehensible. The president has blood on his hands and it will not be able to come washed off.”
This president is moving forward post haste to federalize local police departments, regardless such authority is not constitutional. What can we expect next? I forsee Obama assigning federal marshalls to local law enforcement departments, effectively taking over.When or if this happens, you can bend over and kiss your sweet liberty good bye.

I urge my fellow Americans to first pray for our nation and our elected leaders and the second is to register to vote. Historically, when we have substantial voter turnout, the nation turns away from self-destructive ways.
John White
Rockwall, Texas