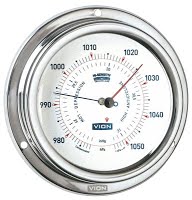 Election results serve as a barometer of the spiritual condition of our nation. What should we expect in the forecast?

Barometers have been in use for centuries to warn of changes in weather. High pressure tells us it will be a good day, while a drop in pressure signals an impending storm. Extremely low pressure marks the presence of a dangerous cyclone, a hurricane, a typhoon.

Erwin W. Lutzer said, “Our response to temptation is an accurate barometer of our love for God.”

Wayne Dyer said, “Behavior is a much better barometer of what you are than your words.”

Political polls don’t determine election outcomes but do serve as ‘spiritual barometers’ at any given moment in time leading up to the election.

John Adams in a speech to the military in 1798 warned his fellow countrymen stating, “We have no government armed with power capable of contending with human passions unbridled by morality and religion . . . Our Constitution was made only for a moral and religious people. It is wholly inadequate to the government of any other.” John Adams is a signer of the Declaration of Independence, the Bill of Rights and our second President.

The outcome of the 2008 election astonished me. I was again astonished four years later when Barack Obama won a second term. Was I the only man on earth who knew this man’s sordid history? Was it an undisclosed secret that he favored homosexuals and Muslims over Christians and Jews?

Surely, I thought, the gross failures of this present administration are evident to the vast majority of voters, yet, somehow, for some reason, Hillary Clinton leads in the polls. My astonishment grows by the day.

One female political leader well-known in the Dallas-Fort Worth Metroplex, someone I greatly respect, suggested via a ‘tweet’, “Trump should lay prostrate before God and [the] nation and ask forgiveness for the way he’s treated women.”

Her advice is sound. In fact, I go further. I propose that we as a people should prostrate ourselves before God and ask forgiveness for the way we have disobeyed God and profaned His name.

The phenomena of Donald Trump cannot and must not be ignored. Lance Wallnau calls him a ‘spiritual wrecking ball’.

Career politicians and media ‘talking heads’ are at a loss to explain how this man became the GOP nominee for president. Nominal Christians are perplexed while dependable Christian leaders tell us he is God’s anointed, God’s man to turn America around. I’ve come to agree. His campaigned has inexplicably shaken all political parties, top to bottom.

I don’t write for the purpose of promoting Donald Trump, but to encourage, to plead with my fellow Americans to turn from wicked ways.

This morning I prostrate myself before God and ask forgiveness for my sins and the sins of my fellow Americans. I see our ‘spiritual barometer’ dropping lower by the hour to warn us of the approach of a storm of Biblical proportion.

Election polls will close the evening of November 8, but it is the Cross that has the final word. It’s not too late for God to spin the ‘storm’ away from our shores.

May God bless America. May the people of God bless their Creator.