Skip to content
RockwallConservative Faith, History, Politics December 26, 2016December 27, 2016 4 Minutes
“Rabbi Levi Shemtov, executive vice president of American Friends of Lubavitch, turned an Obama administration official’s speech about “fighting darkness with light” on its head, evoking Israeli Prime Minister Benjamin Netanyahu — who has had an antagonistic relationship with President Obama — and urging Jews not to despair about the “darkness” cast by the United Nations vote.” Read more from The Washington Examiner http://washex.am/2iira3l 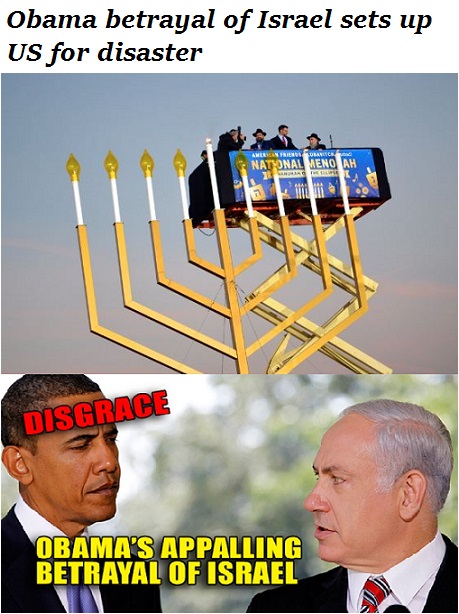 Each time a U.S. president has betrayed Israel, disaster follows.

President George H. Bush promoted the Madrid Peace Conference, where he attempted to divide the land of Israel in exchange for “peace” with the Palestinians. The disaster that coincided was the October 1991 Holloween ‘Perfect Storm’.

President George H. Bush tries a second time to divide the land of Israel. The disaster that coincided was Hurricane Andrew.

President George H. Bush tries a third time to divide the land of Israel. The disaster that coincided was Hurricane Emily.

President Bill Clinton met with Syria’s President Hafez el-Assad in Geneva to discuss Israel giving up the Golan Heights. The disaster that coincided was the 6.9 Northridge earthquake, the second most destructive natural disaster to hit the United States, behind Hurricane Andrew.

President Bill Clinton met with Israeli Prime Minister Benjamin Netanyahu in the White House. It was a rude and disrespectful day in which Clinton and Secretary of State Madeleine Albright refuse to have lunch with Netanyahu. The disaster that followed was the Monica Lewinsky scandal that resulted in the impeachment of Clinton.

President Bill Clinton met jointly with Israeli Prime Minister Benjamin Netanyahu and Yasser Arafat at the White House to forge another ‘land for peace’ deal. The disaster that followed was Hurricane George that blasted the Gulf Coast with 110 mph winds and gusts up to 175 mph. The hurricane hit the coast and stalled until the agreement was finalized and Arafat addressed the UN. Then it hit and caused $1 billion in damage. At the exact time that Arafat departs the U.S., the storm begins to dissipate.

President Bill Clinton met jointly a second time with Israeli Prime Minister Benjamin Netanyahu and Yasser Arafat at the Wye River Plantation in Maryland to discuss – again – forfeiture of Israeli land to the Palestinians. The disaster that followed two days later was a massive storm over one-fourth of Texas that left behind $1 billion in damages. Clinton declared Texas a disaster area on 21 October.

President Bill Clinton met Yasser Arafat and representatives of forty-two nations to raise funds for a Palestinian state with Jerusalem as its capital. (This compares to President Obama’s funding of the Iranian nuclear arsenal that was publicly dedicated to the eradication of Israel.) The disaster that followed was a financial collapse as hundreds of billions of dollars in capitalization were lost in the U.S. and European nations. The Dow dropped 216 points and the European market experienced the third worst day in its history.

President Bill Clinton arrived in a PLO-controlled area of Israel to forge another ‘land for peace’ deal. The disaster that followed was four articles of impeachment of the president by the House of Representatives THE SAME DAY.

Disaster #10: 3 May 1999 – Arafat was to announce a Palestinian state with Jerusalem as its capital, President Bill Clinton in agreement

The disaster that followed was the most powerful tornado storm system in the history of the U.S. Tornadoes. The states of Oklahoma and Kansas were devastated by winds up to 316 mph. Bill Clinton subsequently asked Arafat to hold off on his announcement.

President George W. Bush sent Secretary Tenet to Jerusalem to promote his ‘Roadmap to Peace’, the continuation of the failed Oslo Accord. The disaster that followed was tropical storm Allison that caused over $7 billion in damages and closed Houston’s Bush Airport for two days. When Secretary Tenet left Jerusalem, the storm calmed.

This was a result of President George W. Bush’s ‘Roadmap to Peace’. Hurricane Katrina popped up the same day. The behavior of Katrina defied computer models as it inexplicably changed course to cross Florida on its way to the Louisiana coast where it made landfall on 29 August 2005. You probably know most of the details about this storm.

Will there be a thirteenth disaster? I hope not. The election of President Donald Trump who pledges his full support for Israel will hopefully defray God’s wrath on the U.S.

In the video below, Lance Wallnau speaks to Obama’s betrayal of Israel via his Facebook page.

The prophet Zecharia wrote, “For thus said the Lord of hosts, after his glory sent me to the nations who plundered you, for he who touches you touches the apple of his eye: “Behold, I will shake my hand over them, and they shall become plunder for those who served them. Then you will know that the Lord of hosts has sent me…“
Pray for the peace of Jerusalem.
John White
Rockwall, Texas