What do you call a creature with three heads? Answer: MONSTER 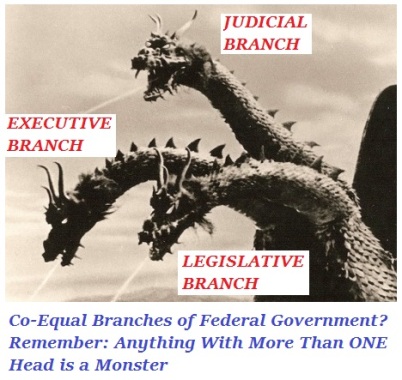 Let’s dispell the myth of coequal branches of gov’t.

The authority structure of the United States of America is unique in all human history. God supernaturally moved the Founding Fathers by His grace to craft a constitution in which the supreme authority was vested in the citizens, not an oligarchy, not a human king, not a democratic mob.

My former pastor Larry Lea, speaking on the principle of authority, often said, “Anything with two heads is a monster.” He was referring to then popular Japanese monster movies.
If a government with two heads is a monster, what do you imagine a government with three heads is?
No. the Constitutional framework of our federal government does not have three heads, but the people heading the three branches of government either don’t know this truth or they simply choose to ignore it.
How do you know who the boss is? Is it not the person who can fire you?
The Legislative Branch has the Constitutional authority to remove from office presidents and judges, but neither the Executive Branch nor the Judicial Branch can ‘fire’ a lawmaker.
Who can ‘fire’ a lawmaker? You and I can. We the People.

Yes, the supreme authority of our government is God under whom the next in the line of authority is We the People. Third in line is the Legislative Branch.
At the time of this writing, even our new President Donald Trump, aka the Human Wrecking Ball, believes the myth of co-equal branches of government.
Isaiah 38:19 says, “The father shall make known [God’s] truth to the children.” John 8:32 amplifies this teaching principle, saying, “And you shall know the truth, and the truth shall make you free.”
The Constitution isn’t the foundation of our government. The foundation is the Declaration of Independence, to wit:
“We hold these truths to be self-evident, that all men are created equal, that they are endowed by their Creator with certain unalienable Rights, that among these are Life, Liberty and the pursuit of Happiness.–That to secure these rights, Governments are instituted among Men, deriving their just powers from the consent of the governed…”
The Constitution is the framework of federal government that rests upon the foundation of God’s authority as revealed to mankind.
I invite you to pray that President Trump, the lawmakers, and federal judges will experience a divine revelation of this profound and easily understood hierarchy of our system of government.
Soli Deo Gloria
John White
Rockwall, Texas