Faiz Shakir is National Political Director of the ACLU. Why is Faiz anti-Trump, anti-Christian, anti-Rule of Law?

Faiz Shakir, via ACLU email this morning, urges his followers to disrupt American society in order to undermine and destroy what We the People wish to do with respect to vetting Muslim immigrants, the border wall, and the rule of law.

I quote Faiz Shakir from his email:

Throughout the history of our nation, it is only when large numbers of people [mobs] stand up and make their voices heard [translation: public disruptions] does the government respond to their calls for change [translation: intimidate Congress].

President Trump’s unprecedented attack on our freedoms requires that kind of grassroots energy and mobilization. We have to organize ourselves into a force so large and powerful that we cannot be stopped. [What we know for a fact is President Trump is restoring our freedoms as he pares down bloated, progressive-infested bureaucracies.]

That is what we are building towards with our People Power Resistance Training on March 11. Right now there are more than 1,600 events happening in 50 states.

****
According to Discover the Networks:

During his college years, Faiz Shakir was a member of the Harvard Islamic Society (HIS), which is affiliated with the Muslim Students Association of the United States and Canada. In 2000, HIS held an Islamic Awareness Week and Faiz Shakir served as the co-chair for the week’s events. One of those events included a fundraiser for the Holy Land Foundation, a group which acted as the fundraising arm for Hamas in the United States.

Shakir went on to become the Editor-in-Chief at Think Progress (from 2005-2012), and Vice President at the Center for American Progress. In May 2012, he was appointed as a senior advisor and media director to Nancy Pelosi, the Democratic Minority Leader of the House of Representatives.

Shakir co-authored the “Fear Inc.” report, which implicitly claimed that Islamophobia was the product of a Jewish conspiracy, and wrote positively about the Tunisian Islamist Al-Nahda Party and its genocidal head, Sheikh Rashid Ghannouchi, who has engaged in blatant anti-Semitism and has said, “There are no civilians in Israel. The population—males, females, and children—are the army reserve soldiers, and thus can be killed.”

During his time at Think Progress, Shakir repeatedly attacked the Jewish State, endorsing 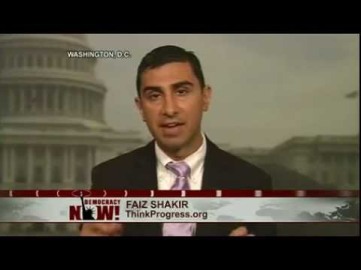 the Hamas aid flotilla to Gaza and attacking Israel’s attempts to defend itself against terrorists.

Under Shakir, Think Progress promoted Muslim Brotherhood-linked Islamists, much as he tried to direct funds to Hamas during his Harvard days.

Think Progress gets surprisingly low scores even among liberals. Not only do conservatives distrust it, but the general public and those rated mostly liberal split on it. – Frontpage Magazine, October 25, 2014