As reported by Business Insider, March 23, 2017, the NCAA threatened to “remove from consideration all bids to host championship events in North Carolina if the law isn’t repealed by mid-April, when event sites are selected.”

The NCAA, by virtue of its threat to withhold business from the state of North Carolina, violates the law.

Under threat of withholding commerce with the state of North Carolina, that state’s legislature will repeal a law (HB2) that was passed to protect vulnerable women and children from sexual predators who in the guise of or pretense of being ‘transgender’ enter places intended to preserve the privacy of women and children.

What will you do, General Sessions? Will there be an investigation of this apparent violation of federal law? 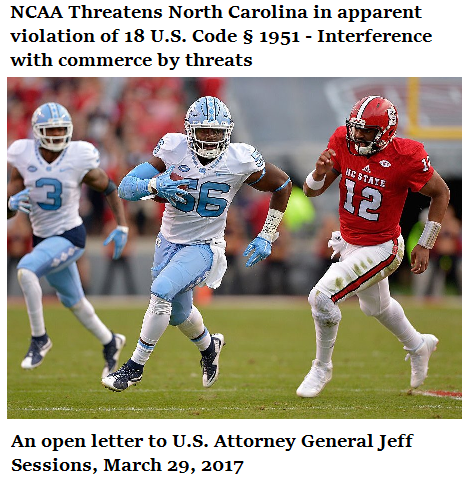 Contact Information to send inquiries and/or complaints to the office of the U.S. Attorney General