When the Left agrees with the Right

Civil liberty-minded organizations from the right and the left criticize legalized theft by the governments known as Civil Asset Forfeiture.

From the Right – The CATO Institute: Policing for Profit video

Office of the Inspector General, U.S. Department of Justice: Review of the Department’s Oversight of Cash Seizure and Forfeiture Activities – March 2017

Excerpt from the Inspector General’s report:

” While the Department views asset forfeiture as an important law enforcement tool, concerns have been raised about its use. Advocates of asset forfeiture reform, including Members of Congress and public interest groups, have expressed concerns that the ability to use forfeiture 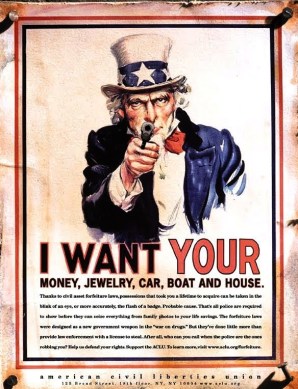 revenues to fund law enforcement activities may incentivize the Department and state and local law enforcement to use asset seizure and forfeiture beyond the purpose of deterring and punishing criminal conduct and in a manner that creates risks to civil liberties. This concern is heightened because Department law enforcement officers have the authority to seize and forfeit cash or property without independent judicial oversight and without charging the owner or possessor of the cash or property with a crime. Advocates of reform also have argued that the Department’s historical, but now largely proscribed practice of “adopting” state seizures for federal forfeiture inappropriately allows state and local law enforcement to circumvent their own state laws so that they can obtain a greater share of forfeiture proceeds than they would receive otherwise.”

From the Left – ACLU: ASSET FORFEITURE ABUSE
Excerpt from the ACLU article:
“Police abuse of civil asset forfeiture laws has shaken our nation’s conscience. Civil forfeiture allows police to seize — and then keep or sell — any property they allege is involved in a crime. Owners need not ever be arrested or convicted of a crime for their cash, cars, or even real estate to be taken away permanently by the government.”
My post earlier this year: Texas Civil Asset Forfeiture – Follow the Money, Demand Reform
“In just over a decade, Texas law enforcement collected more than half a billion dollars, $540.7 million, in cash and personal property from Texans suspected of breaking the law. Known as civil asset forfeiture, this legal practice leaves average Texans vulnerable to having their assets seized by police, no trial or proof of guilt necessary.”

Attorney General Jeff Sessions says, “No criminal should be allowed to keep the proceeds of their crime.” To this I ask, what is a criminal? An online dictionary defines ‘criminal’: a person who is convicted of, or who commits, a crime.

General Sessions advocates seizures of property from people who have neither been charged with a crime or convicted of criminal acts.

The right of the people to be secure in their persons, houses, papers, and effects, against unreasonable searches and seizures, shall not be violated, and no Warrants shall issue, but upon probable cause, supported by Oath or affirmation, and particularly describing the place to be searched, and the persons or things to be seized.

By virtue of the fact law enforcement may, at will, seize property without charging or arresting a person suspected of criminal activity, then the seizure is not based on probable cause and is, therefore, unreasonable.

No person shall be … deprived of life, liberty, or property, without due process of law; nor shall private property be taken for public use, without just compensation.

You can learn who represents you in Texas by entering your zip code here: http://www.fyi.legis.state.tx.us/Home.aspx

For Rockwall County and the Frisco area of Collin County (HD-33):

Call the Austin offices and leave a brief message with the respective office staff. I also recommend sending a message via web form email.