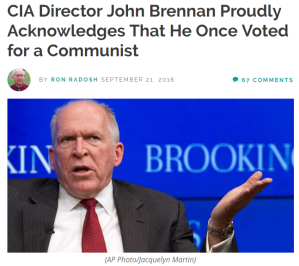 Brennan voted for a Communist candidate. In Texas, he would be classified as a communist.

Click on the picture on the left to read the full story from Pajama Media.

What more do we know about Mr. Brennan?

voice after Donald Trump was elected president, it’s not hard to imagine that in the intelligence community, Donald Trump has his enemies and those enemies are not as restrained as they ought to be,” said Congressman Steve King on MSNBC.

The FBI, the NSA, and the CIA were created for the common defense of the United States of America. At no point in time should a sitting president be targeted as an enemy of the intelligence operatives.

Like Barack Obama, Brennan was and is an activist with a history of affiliations with communists.

It is my prayer that our president will be unhampered in the task before him to drain the swamp.