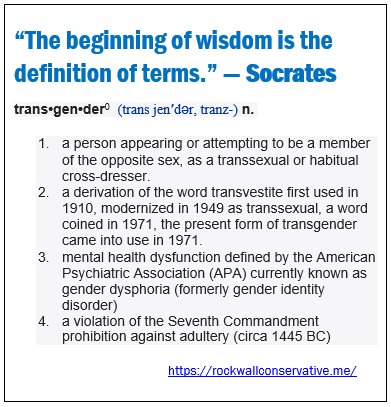 First ever data on US transgender surgeries reveals huge surge in demand: Rate of operations skyrocketed 20% in 2015

High rates of suicide and self-harm among transgender youth – 2016

All authority comes from God, not the Supreme Court, not any political party – strictly from God.

If a man practices homosexuality, having sex with another man as with a woman, both men have committed a detestable act. They must both be put to death, for they are guilty of a capital offense. – Leviticus 20:13 NLT

In this church age of grace, we tend to take a more lenient approach to sin. The psychiatric view of the LGBTQ-whatever matter is a clinical diagnosis of mental illness. One could argue the interchangeability of sin and mental illness.

Scripture says, “The person who sins is the one who will die.” This is in the context of one person sinning, meaning an entire family or population or ancestry shall be held culpable for the sinful acts of an individual. Naturally, the double ‘whammy’ to homosexual activities is all voluntary participants will die.

There are revisionist, liberal theologies that overlook God’s  imperatives even to the point of appointing avowed homosexuals as church leaders. A growing number of religious writers and speakers say practicing homosexuals who profess faith in Jesus Christ can and will go to heaven. Such tread on very thin ice. In fact, I would go so far to say, they are wrong. Dead wrong.

To be fair, I set aside my own opinions and look into the Bible for God’s point of view. Scripture specifically addresses this issue of homosexuality and heaven in Romans 1:26-28, 1 Corinthians 6:9 and 1 Timothy 1:9-11.

We do no good to any person or persons whose behavior imperils their eternal life by coddling them, by creating special classes of people, or by affirming their sin or mental disorder.

Just as disobedient children must be lovingly and directly confronted with the truth, so it is with those who adopt so-called LGBTQ-whatever ‘lifestyles’. If you truly love such people, would you leave them to an eternal hell or draw them to an eternal heaven where the weather is always much better.