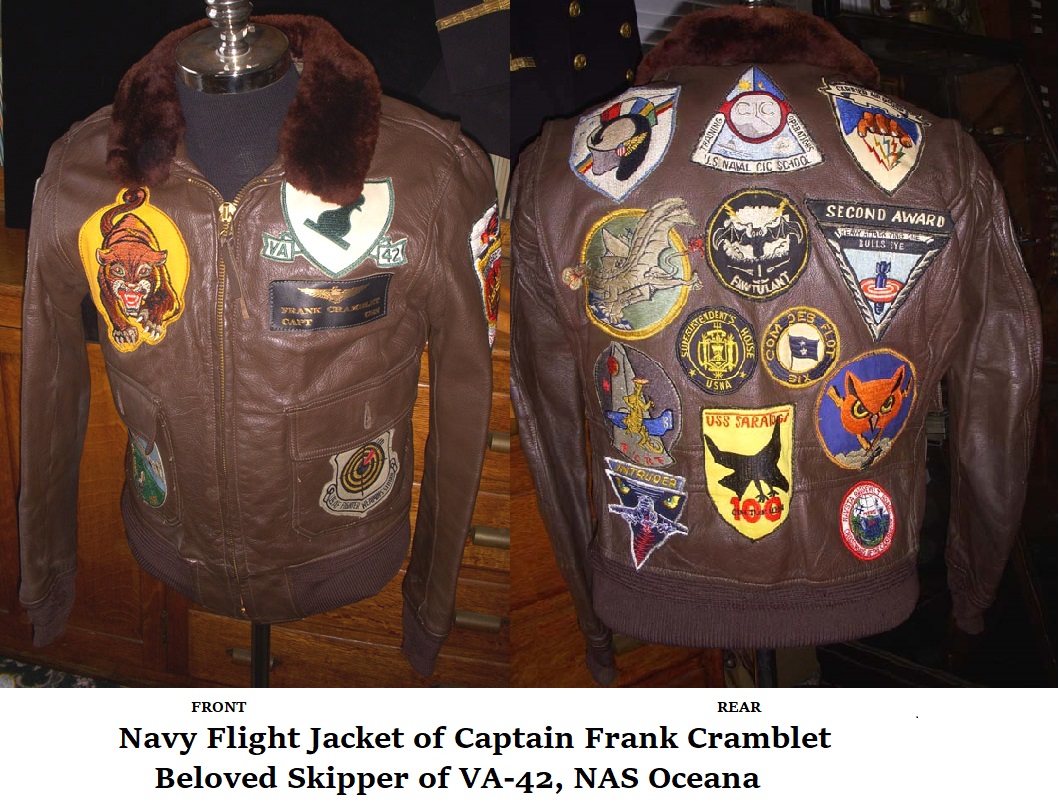 Commander Frank Cramblet skippered VA-42, my squadron, located on NAS Oceana, Virginia. He was a tough, demanding leader who loved those under his command.

I found pictures of his Navy flight jacket, but none of Frank, himself.

We frequently detached to MCAS Yuma Arizona for bombing practice. I remember the heat and dryness. Regardless the time of year, Yuma seemed as close to Hell as you could get without falling in with the Devil.

On one trip the duty of overseeing the preparation of practice bombs fell to me, AQB2 White. Ordinance (explosives) was way outside my electronics systems speciality, but someone thought I should be the boss so off I went to the nearby desert sands with a crew of ordinance men to fill those 250-lb practice bombs with sand.

I felt terrible for those guys. One little scoop of sand at a time they would pour sand into the bomb casings through a very small hole. The men were hot and worn out.

I came up with an idea to get them relief ASAP. “This is how we can speed this up, men,” said I. Screwing open the next bomb casing, I took a paper cup, twice scooped up sand, poured into that small hole, screwed the cap back in and said, “This is how we get the job done faster“.

They looked at me with wide open eyes but no one challenged me. In less than a half hour, we were on our way back to the squadron. At that point, my assigned duty finished, it was lunchtime.

After lunch, someone in charge thought to assign me the duty of squadron base radio operator. It wasn’t much of a duty and it was in an air-conditioned hut, so I was doing well. Well, that is, until our pilots started their first bombing run over the target.

In short, pilots were excitedly asking why the bombs were going up instead of down. I thought to myself that perhaps only two cups of sand were not going to work.

Naturally, Skipper wanted to know why I showed his ordinance technicians my ‘shortcut’. He laughed at my answer and the duty to fill bombs with sand never again became my assignment.

On another detachment, my roommate and fellow Second Class Robby Robinson tested a cart of Zuni rocket pods with a battery-powered continuity tester. One rocket failed to light up his tester so Robby repeatedly reapplied it until that rocket fired off, heading more or less directly toward a Marine Quonset hut next to our own.

The accident investigation cleared Robby of wrongdoing. A photo showed how a stack of practice bombs served to cause that Zuni to swerve away from the Marines and into a Dempster Dumpster.

The night of the incident, Cmdr. Cramblet was onsight. He immediately grabbed Robby, and the two of them hurriedly took off for NAS Oceana ASAP. Mere minutes after the Skipper was out of controlled airspace, the general in charge of the base sent MPs to “arrest that squid“.  AO2 “that squid” Robinson was safe. For now.

I Confess: I Refused to Obey a Direct Order

Care and feeding of the A6A DIANE systems on these planes became my responsibility. The A6A had two speciality radar systems, one for navigation and terrain following, the other to direct ordinance (bombs, missiles, etc.)

Mechanics unaware that our fragile waveguide should never be hammered on were damaging the tracking radar specialized microwave waveguide that circumnavigated the nosewheel well. Consequently, the TC4C fleet was depleting our radar transmitter black boxes, thereby threatening the mission of the entire squadron for which the mission was to train A6A aircrews for sea duty, most went to Vietnam.

The warrant officer (WO) in maintenance ordered me to use a flexible waveguide to get that one TC4C back in operation. Flexible waveguide was used solely for ground testing of radar systems. I refused immediately. He, without asking why I refused, started the paperwork to bring me up for a Court Martial.

When he placed his paperwork before Cmdr. Cramblet, Skipper asked, “Did you ask him why he refused?” My accuser returned to ask, why I refused. I explained: All the A6A operated under the authority of BUWEPS, but the three TC4C were under the authority of the FAA. Therefore, only the FAA could authorize the modification. “Oh”, he replied.

The Tailhook Terror of Virginia Beach

There was a secret collection taken up among enlisted men of VA-42. With the funds

given, an old Ford was purchased. The airframes crew mounted a mock in-flight refuelling probe on the hood and a mock tailhook to the rear of the car. The paint job – white belly, grey top – gave the car the unmistakable likeness of an Intruder. Number 500 as a side number was a finishing touch.

Cmdr. Cramblet was so moved that he wept. From that day forward he left his expensive sports car home and that little Ford made his daily commute between home and the squadron.

Cmdr. Cramblet was perhaps an ideal leader. We thought so. He expected much from his men and we willingly gave him what he wanted. He was no softy, not by any measure. But, he loved the people under his authority.

After my four-year enlistment ended, I lost all contact with my former squadron commander.

It is the personal stories about President Trump’ that bypass fake news media that moved me to honor you, Captain Frank Cramblet, wherever you are. You and our president epitomize a man’s man.