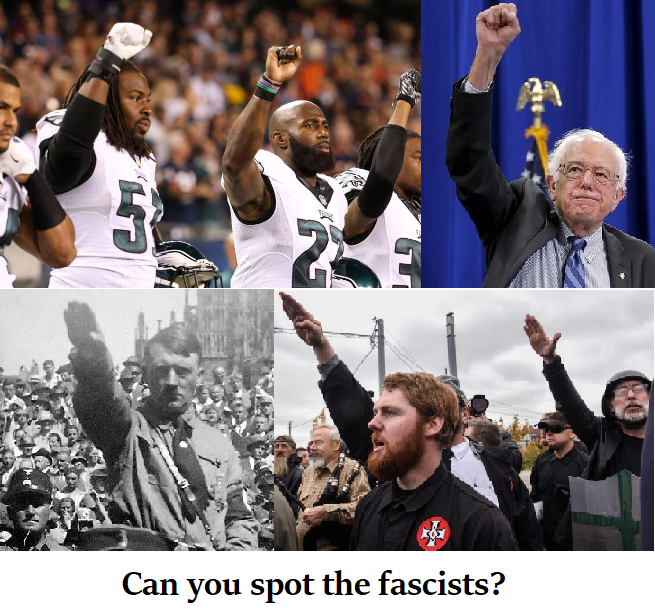 Word of the day: Nationalsozialismus

Campus political activists decry Republicans, in particular, President Trump, as NAZIs. Is this a reasonable characterization?

What is the origin and meaning of the term NAZI?

What is the difference between socialism and fascism?

“It is too obvious, too easily demonstrable that fascism and communism are not two opposites, but two rival gangs fighting over the same territory—that both are variants of statism, based on the collectivist principle that man is the rightless slave of the state—that both are socialistic, in theory, in practice, and in the explicit statements of their leaders—that under both systems, the poor are enslaved and the rich are expropriated in favor of a ruling clique—that fascism is not the product of the political “right,” but of the “left”—that the basic issue is not “rich versus poor,” but man versus the state, or: individual rights versus totalitarian government—which means: capitalism versus socialism.” – Ayn Rand

“the basic issue is not “rich versus poor,” but man versus the state, or: individual rights versus totalitarian government”

How is it one day after Pearl Harbor Day 2017 millennials say they prefer socialism over free-market capitalism?

Read my blog titled Kaepernick Conundrum http://bit.ly/2B0SGPB where I identify liberal public education and historical revisionism as the root causes of animosity toward the greatest nation to ever exist on earth.

As Christmas 2017 approaches, it is my prayer, my desire, for the Peace of God to rule America and for the Holy Spirit of God to reveal truth to the youth of our nation.