Conflicts are not a new phenomenon in America. They were active in, and between, the early British colonies that became our first thirteen states. In general, rivalries were along the lines of doctrinal differences between Protestant denominations and Catholic-vs-Protestant practices. However, the common point of agreement was the divinity of Jesus Christ and the redemption of mankind by grace through faith in the omnipotent God.

“We face a hostile ideology global in scope, atheistic in character, ruthless in purpose, and insidious in method. Unhappily the danger it poses promises to be of indefinite duration. To meet it successfully, there is called for, not so much the emotional and transitory sacrifices of crisis, but rather those which enable us to carry forward steadily, surely, and without complaint the burdens of a prolonged and complex struggle – with liberty the stake.” – Dwight D. Eisenhower, Farewell Address, January 17, 1961

Although the majority of early colonialists were Christian in profession and practice, there were atheists in the population. Thomas Paine, one of our Founding Fathers, contributed to uniting our forbears in rebellion against Great Britain through the publication of pamphlets like the famous Common Sense that advocated independence.

Full-time, militant atheistic organizations like the Freedom From Religion Foundation, the Military Religious Freedom Foundation, the ACLU, the American Atheists, and the Communist Party USA strive to blot out the free exercise of religion clause of the First Amendment.

The irony? Atheism is a religion by definition: a specific fundamental set of beliefs and practices generally agreed upon by a number of persons or sects.

There are two atheistic camps: the avowed atheists, like those listed above, and the practical atheists, the people who claim to be Christian while living lives wholly contrary to the tenets of God’s Word, the Holy Scriptures.

Atheism and Christianity at the Cross-Road

Over my seven decades of life on this planet, I have witnessed atheism – avowed and practical – throughout American society, but atheists now coalesce as socialists and Democrats.

The hallmark of atheists is a pro-death stance that manifests in the promotion of unlimited murder of children in the womb along with the spirit of anti-Christ and a penchant for an all-powerful government.

At this time, President Donald Trump draws the ire of a broad spectrum of atheists, including Jorge Ramos, Rosie O’Donnell, and Richard Dawkins. Add to these, the principal leaders of the Democratic Party.

What should be our response, speaking on behalf of fellow Christians? Should we devote our time to name-calling, public criticism of atheists, or perhaps outlaw atheism?

Norma McCorvey was the infamous Jane Roe of the Rov-v-Wade case in which a liberal Supreme Court created new ‘rights’ out of thin air, notably the right of a woman to kill her child in the womb.

Although Norma never had the abortion, she labored alongside the pro-abortion 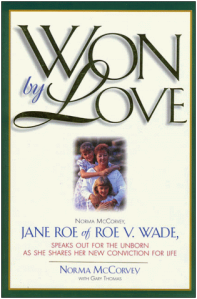 movement until her encounter with a gentleman named Flip Benham. You can read her story in a book she wrote, titled: Won By Love, available from Amazon.com.

Flip Benham labored for many years in the pro-life movement. In her book, Norma reveals her interactions with Flip and he never condemned her nor berated her, but simply loved her.

It was love that won the soul of Norma McCorvey. Norma died at age 69 and is now in the presence of our Lord.

Is atheism the enemy? Well, not exactly. Satan, the Devil, Lucifer, has forever been the enemy that kills, steals and destroys. From the beginning of recorded history, he has sought to make himself lord of the universe. His demonic spirits have moved into the hearts and minds of millions of Americans, deceiving them by leading them to believe lies are truth and to kill unwanted children is good for mother earth.

For now, I believe we have a reprieve from Heaven and our role among nations is the protector of Israel, the apple of God’s eye. As evidenced by the recent UN vote, America and Israel stand against all the nations of the world.

The charitable track record of the USA is one of generosity and kindness. We do not treat our enemies as they treat us. I point to post-WW2 Japan as a prime example. Another example is our country’s response to the devastating 2004 earthquake that devastated the Banda Aceh province of Indonesia.

Satan has caused a lot of damage and he continues through the agency of liberal universities that teach how terrible a country America is. Students are taught false history and fed godless dogmas to the point almost half of young Americans prefer socialism, fascism, and communism over our hard-won freedoms and free-market economics.

All is not lost. “‘As surely as I live,’ says the Lord, ‘every knee will bend to me, and every tongue will declare allegiance to God.’”

A lot of angry things are said during political campaigns and I am not guiltless in this matter. But, I purpose to love my enemies, to do good to them, and to pray for those who come against me. I choose to follow Flip Benham’s example.

We truly have an enemy within our borders that is atheistic in character, ruthless in purpose. That said, we also have spiritual weapons to assure our side wins.

In this season, we celebrate the virgin birth of Jesus. Shortly, we will commemorate his crucifixion and resurrection. Be ever mindful of the empty tomb.