California is a mess and I sense God is moving Heaven and earth to turn that great state around.

Liberal policies declare California a ‘sanctuary state’. Sanctuary for whom? Consider the case of illegal alien Luis Bracamontes who admits to killing two deputies in 2014. In court before a judge, he recently pledged to break out of prison and kill even more. Read more via this link: http://cbsloc.al/2DGD5Dn 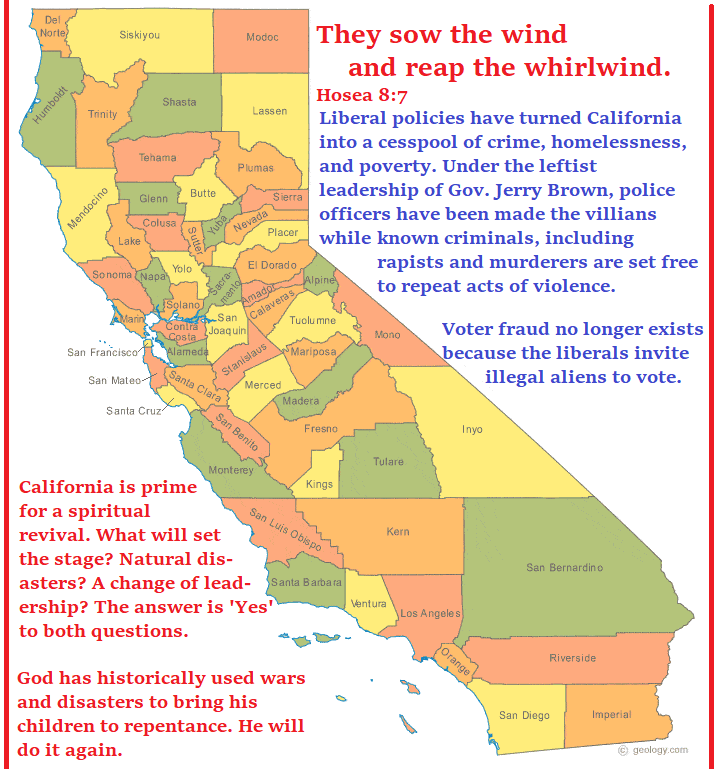 Socialist policies have made the state a wasteland of homelessness. The homeless include groups of mentally ill people, unemployed workers, young adults seeking fame and fortune in Hollywood, and university students. Learn more from the California State University, Sacramento – 2017 Point-in-Time Count.

Progressive (godless) California leaders have sown the wind and they shall surely reap the whirlwind.

The message is this: God uses life-threatening disasters to capture the attention of his children in order to turn them to Him.

It’s entirely possible that spiritual revival could erupt any moment now, but it seems more probable God will use a natural disaster to move his people to their knees.

How do I pray for Californians? I plead for a replay of the Azusa Street Revival and the Jesus Movement. I ask God to remember the Christian minority and to be merciful for their sakes. Will you join me?