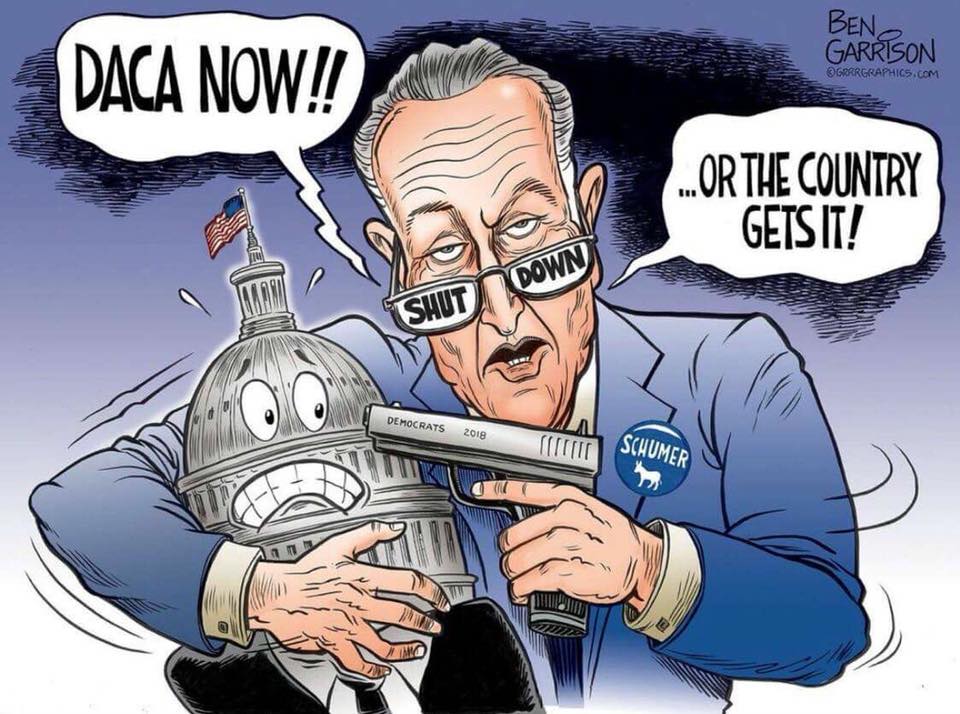 It’s the law, but Congress doesn’t follow the law. The big hangup, the budgeting trap is the Senate filibuster rule whereby the majority is unable to function as a majority.

At present, Sen. Chuck Schumer is hell-bent on placing his party-building immigration overrides before a sound budget. This is why his if-I-don’t-get-what-I-want-I’ll-leave-a-scorched-earth tactic was called the #SchumerShutdown. Are we now on our way to a #SchumerShutdown number 2?

Oh, Sen. Schumer seemed to come to his senses and Republicans shouted “Victory!”. But that short-lived victory came to a screeching halt after a mob of DACA fans showed up at his home. [See story in The Blaze http://bit.ly/2E43v1X ]

The President pledged to build a border wall and he was the winning candidate for office. As is customary, and unlike career politicians, successful businessman Donald Trump is actually doing precisely what he promised the American people he would do.

America is doing extremely well because this president is acting to fulfill his promises. He has been under constant attack by the Democrats and RINOs from even before he was elected. The RINO attacks have subsided, but this relentless assault underway by deep-state Democrat operatives, if successful, will bring on a recession that will almost overnight become a global depression that will eclipse what we experienced in the Great Depression.

Perhaps that is the goal of the Democrat oligarchy. I have no inside information, just an educated guess. The downfall of this sitting president would collapse our economy, shutoff capital investments that drive the economy to historic heights. If such should happen, this nation will cease to exist as a bastion of freedom. There is no place to which we can seek refuge.

A former mayor of Rockwall said of the last recession that he acknowledged the ship of state was sinking, but “Rockwall is in the crow’s nest“. I remembered how, when the Titanic sank, the crow’s nest went to the bottom of the sea along with the rest of the ship.