In this 2018 season of political races, the candidates of senate district 2 (TX SD-2), the two candidates chiefly divide on the issue of School Choice. How do they compare?

Senator Hall’s understanding of the School Choice issue aligns with the aforementioned Item 147 which states:

Do you see the difference? She doesn’t get it.

Let’s do some school shopping.

Overall, Texas public schools rank 47th, fourth from the bottom of all 50 states. Is this acceptable to you, Ms. Burkett? Why would we not want our state to rank a little higher, like say Number One? Homeschool and private school graduates add value to the overall education of Texas students.

Here in Rockwall County, we have two school districts, Rockwall and Royse City. How do they compare to Garland ISD? For a fair comparison, I include the Greenville ISD ranking.

Texas School District Rankings
Updated Thursday, July 27, 2017, based on the 2016-17 school year test scores.
(To view rankings, open the above link and enter the district name in the search box on the righthand side.) 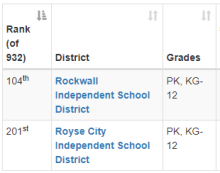 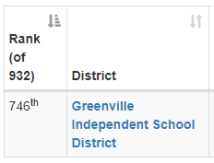 I talk a lot, some say. Well, it’s true. I also listen. Over the 30+ years of our Rockwall residency, enumerable parents have stated their number one reason for moving here: Rockwall Schools.

Both districts with Rockwall County rank very high, Rockwall ISD at 104, Royse City ISD at 201. Sadly, the district Ms. Burkett holds up as her gold standard ranks miserably down at 473.

We moved to Rockwall from Garland in 1987. The differences between Garland ISD and Rockwall ISD were to us like night and day. By the way, all four of our children graduated from Rockwall High School. My wife and I served as RHS Band Boosters and loved every minute of it. I am pleased to report that Rockwall High School remains a very good school and parents continue to move here for this reason.

Senator Bob Hall’s understanding of the School Choice issue precisely aligns with the GOP Platform that was approved by thousands of Texas delegates from 254 Texas counties.

Referring back to Item 147, “the right to choose” distills down to academic freedom.

Six of my grandchildren residing here in Rockwall County enjoy the freedom of homeschool. Not all families can homeschool because mom and dad both work outside the home.

School Districts, to their detriment, are big government political entities that fear a loss of revenue. One of the school lobbyists, a Rockwall resident, runs to unseat Lt. Gov. Dan Patrick who also follows the GOP Platform.

Let’s do a reality check: The majority of families in our county will continue to send their children to one of the two school districts and this is not a bad choice. However, here and across the Great State of Texas, there are families who want to be more than fourth from the bottom. For this reason, they choose either homeschools or privates schools.

Now to the money, the lobbyist and his clients think all tax dollars for public education is their money. Wrong. It’s OUR money.

Homeschools and Private Schools bring to the community a higher standard of education and academic freedom that contributes to the quality of life for all residents.

I know the facts. I researched the numbers. I advocate for academic freedom and academic competition. Academic freedom is but one reason why I endorse and support the re-election of Texas State Senator Bob Hall.

In Rockwall County, early voting runs from February 20 through March 2. Here is a schedule of all EARLY VOTING locations. Election Day is March 6.