Beto O’Rourke says he wants to take Texas back.

The question of the hour is, back to what does O’Rourke plan to take Texas?

Under the leadership of President Donald Trump and the Republican congressional majority, it’s helpful to know the accomplishments of this present Republican administration.

The President is well on his way to making America great again, as he promised in his campaign, but the above-abbreviated list of accomplishments are now the targets of the Democratic Party.

Nancy Pelosi rails against President Trump’s goal to make America great again. She, Chuck Schumer and other lefties mischaracterize the accomplishments of this president. 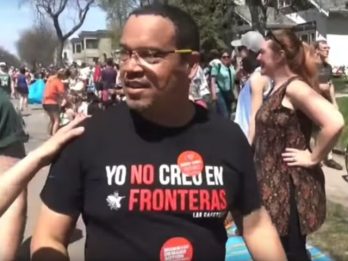 Sadly, there are a lot of our people who are either too lazy or too easily mesmerized by the anti-American rhetoric to acknowledge truth even when it slaps them in the face. Take the Democrat’s top communist, Rep. Keith Ellison who recently sported a tee shirt on which the Spanish phrase YO NO CREO EN FRONTERAS (I don’t believe in borders) emblazoned across his chest.

Last but not least of all the Democrats promising to take Texas back is Lupe Valdez, an avoid lesbian (homosexual to the Democrats who don’t know), an ardent pro-abortionist, and a genuine sanctuary cities champion. Lupe also opposes our Texas voter ID law, an obvious desire to make Texas like California where anyone can vote. In some areas of California, there are more votes cast than there are registered voters and at least one illegal immigrant holds a public office. Learn more about her from her ‘issues’ page of her campaign website.

Lupe faces stiff opposition to Houston homosexual Andrew White whose political spectrum is only slightly different from hers. The chief objective of both is special rights for homosexuals and the derivatives of that population, as it is in California today.

One can surmise the Democrats wish to undo all the amazing accomplishments of our President Trump, our Governor Greg Abbott, our Lt. Governor Dan Patrick, and the conservative majority in our Texas legislature like Sen. Bob Hall (R-SD2).

So, after reading the above, what do you see as the goals of the Democrats in 2018? Roll back the economic gains? Kill more baby Texans in the womb? Open up the southern border? Confer homosexuals rights superior to all other Americans? Raise taxes? Increase welfare dependencies? Higher unemployment of blacks and Hispanics whom the Democrats believe they own? The answer is clearly ‘yes’ to these questions.

Getting out the vote will be key to taking Texas and America forward.