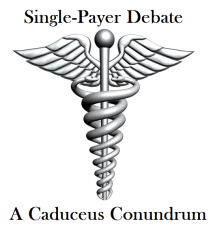 We see a plethora of news stories, blogs, and opinion pieces that refer critically to the U.S. healthcare system.

To start this conversation, let’s be very clear: there is only one U.S. healthcare system, the Veterans Administration. Period.

Human nature seeks the lowest common denominator on all issues. We want simple answers to complex problems. It is this inherent weakness of human nature that answers the siren’s call for nationwide single-payer healthcare.

Hillary Clinton’s effort failed. Barack Obama’s came into action due to his Democratic congressional majority. Not even one Republican voted for the Affordable Care Act and for good reason. We reason.

For the present, we continue to be the Land of the Free, a capitalist country where we enjoy marketplace competition.

Apart from the Veterans Administration, the only single-payer system in America, we have many, beaucoups healthcare systems. My preference is the Baylor Scott & White system.

There are others, like the Texas Health, a conglomerate of Presbyterian and Methodist hospitals and clinics.

The point is simply this. There are many healthcare systems in the United States of America and – Ta Da! – you can choose which you want for your family’s needs.

The National Association of Public Hospitals (NAPH) has over 100 member systems. But, you didn’t know. Right?

Proponents of single-payer healthcare are actually talking about a federally controlled medical system like the Canadians have. I am confident Canadian patients can relate to U.S. veterans who also have long waitlists. It’s not uncommon for single-payer patients to die or worsen before receiving the necessary treatments.

Cuba has a single-payer system. Actually, two. One for the elites and the other for the common man.

Cuba has a single-payer system, but not everything is free and the doctors and other medical professionals are paid about $30/month. Cuban doctors medical personnel are the human capital of that communist government.

Canadians by the thousands come to the US for medical care, but I am unaware of any US citizens racing to Canada for medical issues.

The Democratic Socialists say they want Medicare for all. Really? No, they want single-payer, meaning nothing out of pocket.

Don’t be a sucker for Democrat campaign rhetoric. Choose wisely. Those who want free medical care may get what they want but they will not like what they get.