“Therefore I [Paul] exhort first of all that supplications, prayers, intercessions, and giving of thanks be made for all men, for kings and all who are in authority, that we may lead a quiet and peaceable life in all godliness and reverence.” – 1 Timothy 2:1-2

The mob of lawless rioters is not mommies with babies or ‘unaccompanied minors’. The mob is made up of young men who attack Mexican authorities with rocks. Rocks, by the way, can kill and maim.

In this one attack, Mexican police officers were injured by the rocks thrown at them. 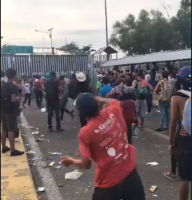 Mexico pushed the mob back with tear gas but within minutes the mob of young men resumed their attack on the Mexican border police.

The Daily Caller 11/1/2018 – TRUMP: ROCKS THROWN BY MIGRANTS WILL BE CONSIDERED FIREARMS BY US

At this time, concertina wire is being installed along our southern border and U.S. Armed Forces prepare to meet such riotous mobs with firepower.

I have written before how these lawless mobs are intended to interfere with our 2018 midterm elections. The time of year is the indicator, along with the size of the mobs (aka caravans).

The usual and customary time for large northward migrations is March and April when illegal aliens will be able to enter with minimal clothing. These organized mobs are heading our way at the onset of winter.

Add to the prayer request a request for a record turnout of voters on Tuesday, November 6.

of the democratic socialists whose stated goals are to undo the 2016 elections, to forever change our republic and to abandon Israel. For the first time in my life, I voted straight-Republican.

May God have mercy on us.